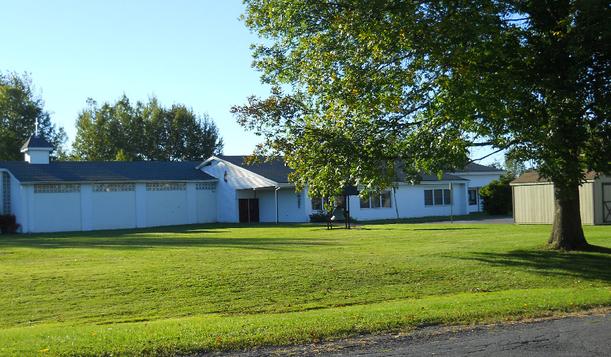 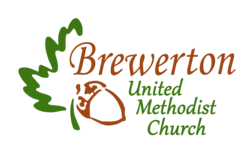 Brewerton United Methodist Church will always honor our past, and the sacrifices made by those who are no longer with us. But we keep our focus on the future, and all the exciting missions this church can accomplish as we move forward in Christ's service.The earliest records available trace the roots of Protestant preaching in the Brewerton area to the late 1700's. Preaching was conducted by the Fort Brewerton embankment near the river.

Around 1848, the first plans for the Union Church at Brewerton were started. This simple white clapboard church was built on a knoll in what was then the center of town. People of all denominations contributed to the building of that church at the time, and the original cost was around $1,700. The first official mention of it as a Methodist congregation was in 1854, and the building was the home of the Brewerton United Methodist Church until 1964.

The original church had a tall steeple. The large brass bell for the belfry was brought here from Troy, NY on a canal boat in 1855. The church bell was not only a call to worship but was also tolled for the death of anyone in the village, ringing once for every year of age. For decades, this beloved church building was home to a steadily growing congregation, and one pastor even wrote a poem about it.

In 1960, the hamlet of Brewerton was growing quickly, and the church was outgrowing its building. There wasn't enough land at that location to expand the building, so the difficult decision was made to leave the old church and relocate the congregation. In 1961, a total of seven acres on Orangeport Road were donated for the new church building. The groundbreaking for the new church building was July 7th, 1963, and the first service was held there on February 9th, 1964. The new enameled copper sanctuary cross was built with love by the people of our church, at the suggestion of the church's architect, William Oliver. But we also included memories of our former church by including the old altar, the lovely dove from the stained glass windows, and, of course, the historic brass bell.

By 1999, the "new" church building was once again being outgrown. It had become home to a community food pantry and a child care program. But this time, we had enough surrounding land to expand the building substantially without moving. The groundbreaking for a large addition was held on September 10th, 2000, and the addition was dedicated in 2001. This building project allowed us to add multiple new classrooms, a much larger and more versatile fellowship and event room, handicapped-accessible restrooms, a new lounge, child care offices, and central air conditioning throughout the building.

Today, we're making more upgrades to the addition in order to enable us to provide effective daycare for infants and toddlers in early 2012.

​Brewerton United Methodist Church will always honor our past, and the sacrifices made by those who are no longer with us. But we keep our focus on the future, and all the exciting missions this church can accomplish as we move forward in Christ's service.